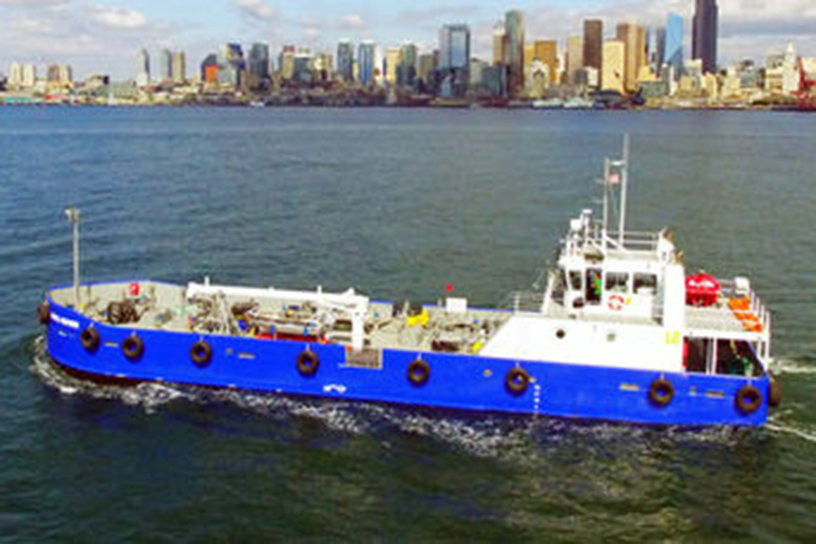 Maxum Petroleum is a leading supplier of marine diesel oil and lubricants on the US west coast, founded in 1946, with centers in seven major ports. Its parent company, Pilot Thomas Logistics has become a major distributor of fuels and lubricants to the energy field services throughout North America.

Maxum operates and maintains all its tank barges and tugs, and elected to develop a small self-powered tank vessel to improve its service to marine traffic on Puget Sound from its base on Elliott Bay. To create the design and specification, Maxum's management and engineering staff worked closely with Elliott Bay Design Group (EBDG) who had designed their previous 15,000-barrel tank barge Global Pilot in 2014.

Elliott Bay Design Group proposed a barge-type double-hulled vessel with a length of 127 feet, 32-foot beam, 13-foot molded depth with a 10-foot draft to comply with ABS loadline and ABS Sub-Chapter D rules for steel vessels under 90 meters. The Global Provider was given a capacity of approximately 165,000-gallons but needed to measure below 100 gross tons. To ensure maneuverability when coming alongside in tight berths, Maxum specified the vessel have twin screws and twin Deflector Marine rudders.

"The Global Provider is the result of years of collaboration between our Maxum Team, our valued customers, Elliott Bay Design Group (EBDG) and Jesse Engineering. Most of our customers receive smaller deliveries, so the new vessel will fill an important niche for our maritime community," explained Dan Kovacich, VP of Maxum Petroleum.

"We wanted a versatile vessel that would provide the highest level of environmental protection and compliance, and allow Maxum to efficiently provide its diesel and lube oil customers in Puget Sound," says Maxum Petroleum's Mike Curry. "We have a 15,000-barrel barge on the job, but this new boat with a lightship displacement of 325 tons will be able to more efficiently handle our factory processor and ATB-tug customers. While oil barges typically target the deep-draft commercial sector, the Global Provider is sized to service a wider range of vessels and avoid the problematic overflow and storm-water risks and implications associated with re-fueling by multiple tanker trucks."

Jesse Engineering, a specialist in very large or complex fabrications at its facility on the Hylebos Waterway in Tacoma, was selected as the builder. In 2017, Jesse had delivered the superstructure for Olympic class 144-car ferry Suquamish for Washington State Ferries. The EBDG team worked closely with all parties involved on the concept and contract design, regulatory support and detail engineering.

The result is a vessel that features the best-available technology to ensure oil is handled safely and responsibly. One example is the ability to provide advanced tank-level monitoring with the electronic Bergen Guard-Level Quad Stick system.

A pair of Cummins 660 HP diesel engines provide redundant propulsion and power. The barge-type hull features six pairs of cargo tanks, amounting to 3,700 Bbls of MGO in six tanks, and 20,000 gallons of lube oil carried in two pairs of tanks.

On deck, the Global Provider has JK Fabrication 21-26C hydraulic anchor winch and a Rapp Marine Hydra-Pro 30 5F crane with 2,000 lbs. capacity to handle the hoses and a 14-foot Stabicraft aluminum double-walled tender. The petroleum products are transferred by a Blackmer HXL6 pump rated at 750 GPM, and a single Blackmer X4 rated at 520 GPM for pumping lubricants.

The cargo-handling system allows it to move segregated products, lube and fuel oil without cross-contamination. The ship is equipped with its own spill-response equipment, including 600 feet of containment boom, and a large supply of absorbent materials.

The bridge is equipped with a dual Furuno Navnet Navigation system and the robust fire-fighting capabilities include two Ansul 4-inch fire pumps, each with an output of 400 GPM at 100 PSI from a pair of Ansul Foam Monitors. A 300-gallon tank holds fire-fighting foam. The vessel has 6 fire stations in all. A FLIR M-625CS camera is mounted above the bridge and CCTV covers the entire vessel. The ship's electrical system is protected by a Guard Power UPS 400 emergency power supply. The masthead stands 43 feet above the waterline, but is hinged to reduce its height to 25 feet, allowing the boat to transit waterways without the need to wait for draw spans to open.

AutoNav's Electro-hydraulic steering with two wing stations connects with the powerful Deflector rudders, and Furuno Satelite Compass. The helmsman also has a traditional Richie compensated compass on the centerline. The helm chair is a Shox 5. There are accommodations and a galley for four crew, making longer runs possible. "We have one barge each on the Columbia River and in San Francisco Bay," Mr. Curry stated. "If we have a barge in the dry dock in any of these ports we can send this boat down as relief."

The Global Provider has been designed as a no-discharge vessel with all black and grey water plumbed into a holding tank, this tank can only be pumped ashore.